Magic & Beyond with David Garrity 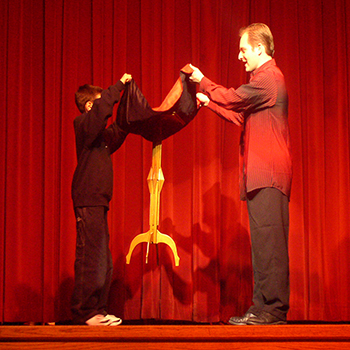 Illusionist David Garrity presents “Magic & Beyond.” This performance is
appropriate for all ages. "Magic & Beyond" is a one-person illusion show that
features unique, theatrical and visual magic, audience participation, and comedy
to a custom-edited musical soundtrack.


Highlights from the “Magic & Beyond” performance may include hilarious
stunts of apparent mind-reading, an incredible illusion where a table
mysteriously floats around the stage and out into the audience, “dangerous”
stunts, a beautiful and artistic illusion involving ordinary Hula Hoops that
perform extraordinary magic and a hilarious Houdini-style “Escape
Challenge.”

Our Saturday Morning Series is made possible, in part, by generous support from Stewart's Shops and Hudson Valley Foundation for Youth Health.